A laugh out loud romantic mystery!

Jolie Goodman is a perennial good girl—which is how she wound up selling shoes at Neiman Marcus during the holiday season: She walked out on her brokerage job because her boss asked her to do something unethical. Now she’s trying to start her own brokerage firm in Atlanta at the worst possible time. Also pressing on her mind is the fact that her boyfriend of the last few months is missing…along with her car. With problems piling on, she manages to make a new friend at work, but too late she realizes her gal pal Carlotta Wren is a serial party crasher—which is fun…at first. But no one’s laughing when a body turns up at an upscale party they’ve crashed and they’re the only people who aren’t supposed to be there! Jolie vows she’ll never crash another party…if she gets out of this mess alive.

A featured alternate of the Doubleday Book Club and the Mystery Guild.

(This book is the prequel to the BODY MOVERS series...meet Carlotta Wren before she was scared straight!) 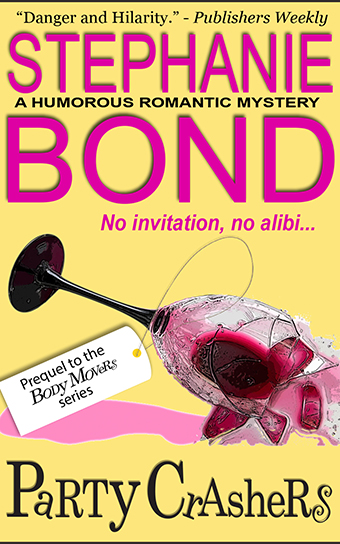 2 Bodies for the Price of 1

4 Bodies and a Funeral

5 Bodies to Die For