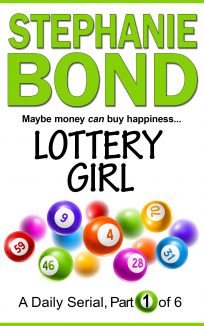 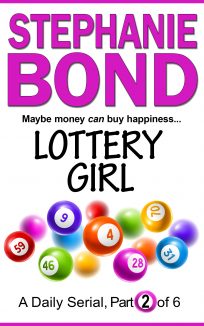 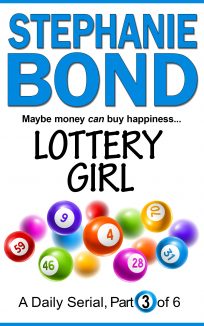 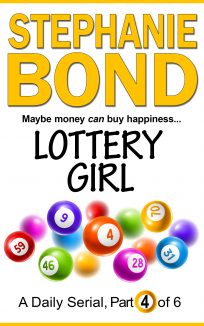 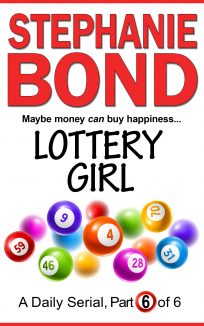 Hello.  I’m Mallory Green—an ironic last name once you learn my story.  I grew up in the foster system, so I’ve had a laundry list of surnames in my relatively short life.  Then I got married (a colossal mistake) and acquired yet another name I’m currently trying to rid myself of.

Green is supposed to be lucky—four-leaf clovers, the luck of the Irish… the literal color of money and prosperity.  But you couldn’t prove it by me.  I can’t remember a time when I wasn’t pinching pennies and dreading opening my mailbox full of overdue bills.  I’m in debt up to my unplucked eyebrows over a college education I couldn’t finish, a multi-level marketing business my ex convinced me was a good idea, a lemon car that hasn’t run since a month after I drove it off the lot, and vet bills for my inherited French bulldog Nessie, among other things.

As a result of my accumulated poor financial decisions, I’m working round the clock:  during the week, I’m a receptionist at a soulless office building, on the weekends I waitress, and most nights I pull the late shift at the GiddyUp GoMart.

To-date I’ve been unlucky in life, in love, and in fortune.

But that all changed the day my numbers came up—literally.

Can money buy happiness?  Friend, I’m SO ready to find out!

The *FREE* LOTTERY GIRL serial ran July 1-December 31, 2020.
If you want to catch up, 6 e-novellas are available from Amazon that contain each month's episodes.
A print and audio version of the complete serial will be available in Spring 2021.

Good luck in the hearing.  Call me after the judge’s decision or anytime you want to talk and I’ll try to step away from my meetings.

I smiled at Ryan’s text and suddenly missed him terribly.  I’d grown accustomed to his big, comforting presence nearby.  But I understood he had other commitments.  When he’d taken me on as a client, he probably didn’t expect me to become a full-time job.

Next to me, Buckley was ending a phone call.  He looked stern and competent in a dark suit, carrying a weathered briefcase.

“There’s been a development in the case.”

“Mrs. Conway said she’d settle for half the winnings.”

I frowned.  “Half the winnings for a ticket she refused to buy?”

“I know—it’s robbery.  But I expected this.”

One part of me railed against the injustice, but another part of me reasoned I would’ve been satisfied with a jackpot half the size, and a bird in the hand was worth two in the bush.  “What should we do?”

“It’s your decision, Mallory, but I’d advise against it.  It sets a precedent for the two cases that follow.”

“But if I don’t settle, I could walk out of here with nothing.”

“Yes.  And I hate to rush you, but they need an answer now.”

My mind whirled with the stakes of my decision.  The old Mallory would take the safe option, even if it meant going against my values.  But after all I’d been through the past few weeks, I was starting to feel fearless… and I was tired of being taken advantage of.

Buckley nodded, then punched in a number on his phone.  “Our answer is no,” he said.  “See you inside.”  When he ended the call, he gave a reasonable facsimile of a smile.  “Are you ready?”

“I suppose,” I murmured.  But my fearlessness had fled, replaced by anxiety and nausea.

“Remember, be calm when you’re on the stand.  Make eye with me, with the opposing attorney, and with the judge if she addresses you.”  He scanned my outfit.  “Good choice—you don’t look rich.”

“Thanks,” I managed.  I was wearing the gunnysack dress that Deena the public relations manager had selected for my TV debut as a lottery winner.

When we walked into the courtroom, I was instantly nervous.  The dark wood of the room and the large pieces of furniture, especially the judge’s desk area, were so intimidating… although I supposed that was the point.

The judge, the Honorable Evangeline Habney, was already seated, as was opposing council.  Mrs. Conway was unrecognizable—gone were her garish “lucky” jackets and jangling charms and poufy hair.  She wore a grandma cardigan and sensible shoes, presumably to play up the fact that I, a youngster, had stolen money from an elder who really needed it.  She glared at me as we took our seats.

The pomp and circumstance of the preliminary remarks did nothing to calm my nerves—it only drove home how serious the matter was being taken.  The judge explained why the hearing had been expedited and that the attorneys were in agreement the case should be ruled on as soon as possible.  The attorneys gave short opening remarks.  Buckley was brief and surgical—I was simply doing my job; Mrs. Conway was trying to take advantage of a minimum-wage cashier.  The opposing attorney said the opposite, accusing me of keeping a ticket she had paid for.

I walked to the stand on wobbly legs to give my testimony.  When I pledged to tell the truth, my raised hand was shaking.

“Ms. Green,” Buckley said, “to the best of your ability, will you tell the court the events of the evening the winning ticket was sold at the GiddyUp GoMart?”

I cleared my throat.  “Mrs. Conway is a regular customer of the store.  She came in with lists of pre-selected numbers she wanted to play.  I was more accurate at entering complicated orders, so I usually rang her up if I was working.”

“And on the night in question, did Mrs. Conway come in with a list of pre-selected numbers?”

“Your honor, I’d like to point out that the owner of the store, Ramy Asfour, and a coworker of Ms. Green’s, Shawna Dell, both submitted depositions to fact that they were present when Mrs. Conway consulted her list.”

The judge nodded and indicated she had the depositions.

“Tell us about the transaction,” Buckley continued.

“I punched in the numbers one set at a time because Mrs. Conway liked to have each set on a separate ticket.  When I punched in one set of five numbers and handed her the ticket, she told me I’d gotten one of the numbers wrong.”

“I don’t have the authority to void a transaction, so instead of asking my boss to void it and make Mrs. Conway wait, I decided to buy the ticket myself.  Then I completed her order.”

“And she left, satisfied?”

Buckley looked at the judge.  “Your honor, as proof of my client’s testimony, see exhibit A, the ticket Mrs. Conway claimed from that date that matched all but one of the numbers of the ticket Ms. Green bought and later claimed.”

Buckley thanked me, and turned questioning to the opposing council, a thin, precise-looking woman.

“Ms. Green, is it customary for employees at the GiddyUp GoMart to buy lottery tickets?”

“And is it customary for them to process their own transactions?”

I swallowed hard.  “No.  It’s not against the rules, but generally, we process each other’s lottery ticket transactions.”

I wet my lips.

“Isn’t it to cut down on the risk of fraud?”

“But in this instance, you chose to go against the rules?”

“They’re not rules,” I repeated.  “They’re guidelines.  And yes, as I said, I chose to go against the guidelines because I didn’t want Mrs. Conway to be inconvenienced.”

“That one-time exception certainly turned out nicely for you,” he said dryly.

When she finally took her place, she looked every inch of a vulnerable senior citizen.

“Mrs. Conway, how are you today?” her attorney asked.

“Not well,” she said.  “I can’t sleep over knowing the money that should’ve been mine and my family’s was stolen from us by that clever cashier.”  She lifted her cane and pointed it at me.

“You paid cash for your tickets the night of July thirtieth?”

“And you distinctly remember giving the set of numbers to Ms. Green that were later drawn as the winning numbers?”

“Yes.  I play the same ten or twelve numbers often, in different combinations.”

“Exhibit B, your honor is a list of numbers Mrs. Conway considers to be her lucky numbers.  As you can see, the five winning numbers from the date in question are on her list, proving she gave those numbers to Ms. Green, but Ms. Green kept that ticket.”

He looked triumphant when he passed questioning over to Buckley.

Buckley gave Mrs. Conway his best smile. “Mrs. Conway, do you have the receipt from your purchase the evening in question?”

“No, because I trusted Ms. Green.”

“Exhibit C, your Honor, shows the register receipt from that evening.  As you can see, the winning set of numbers is circled, with a handwritten note by Ms. Green that she purchased the ticket.”

Buckley gave her another smile.  “Mrs. Conway, don’t you think it’s strange that of the dozens of tickets you purchased that day from the GiddyUp GoMart, that Ms. Green kept only one of the tickets?”

The woman leaned forward.  “If someone steals enough tickets, sooner or later they’re going to get lucky and steal a winner.”

Buckley frowned.  “No more questions.”  As he walked back to the table, I knew we’d taken a hit.

For closing statements, the attorneys reiterated their arguments.  Buckley pointed out there was no evidence I had stolen the ticket, that my boss and coworker had sworn to my integrity.

But honestly, I could see the case going either way.

The judge asked for a thirty minute recess to make her decision.  While we waited, the opposing attorney came to our table and leaned down.  “Last chance to settle.  Split the winnings, fifty-fifty?”

Buckley shifted in his seat.  “Give me a few minutes to consult with my client.”

I could guarantee myself something… on the other hand, if Mrs. Conway won, the money would be gone, the subsequent lawsuits would go away, and I could disappear into the background.  I wavered.

He looked at his counterpart and signaled thumbs down.

During the next few minutes, I changed my mind a dozen times, and was on the verge of telling Buckley to take the deal when the judge emerged from her chambers.

“I realize there is a fortune at stake in this case,” the judge said.  “It’s clear the defendant and the plaintiff have differing accounts of the transaction in question.”

My chest vibrated from the pounding of my heart.

I exhaled…. then one breath later, I tensed up again.

That's the end for LOTTERY GIRL!  If you've been following along with the daily serial, thank you SO much for your support.  If you need to catch up:

Click here to order any or all of the six LOTTERY GIRL e-novellas exclusively from Amazon!

Share on FacebookShare on TwitterShare on PinterestShare on LinkedInShare on Email
© 2021
Stephaniebond.com