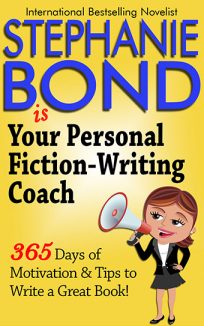 Welcome to my page dedicated to anyone who's always wanted to write a novel, but didn't know where to start. I'll post a tip each day from my book YOUR PERSONAL FICTION-WRITING COACH: 365 Days of Motivation & Tips to Write a Great Book! and then, I want to hear from you:  Like the Personal Fiction-Writing Coach FB page and leave a comment to let me and your fellow writers know if the day's tip or writing exercise resonates with you and your project. Grab your writing pals and send them over, too!

So you want to be a writer? Or maybe you’re already a writer, but can’t seem to get that novel written? Or you’ve written a few books, but the thrill is gone. Is there a trick, you wonder, to writing a great book, or even finishing a so-so book? Why, yes—there are three tricks, actually, that veteran writers like me keep top secret (shhhh!):

The list probably isn’t the romantic, idealistic answer you were hoping for, but I wrote this book with the idea of dispensing daily inspiration to get you to think about your story—and to write. Because I know from experience your motivation will give out before your imagination will. This book is structured to ease you through the life-cycle of creating a full-length novel, from broad stroke advice and self-evaluating questions, to more specific tips when you get to the planning and writing stages. I’ve also included pitfalls to avoid, lessons I’ve learned and techniques to help you manage your writing time.

If you like guarantees, writing isn’t for you. That said, if you write a novel and put it out into the universe, I guarantee you will:

This daily serial will run through December 31. Each day's writing tip or exercise will be posted for 24 hours, 4am Eastern to 4am Eastern. Set a reminder on your calendar, fridge, or phone so you don't miss a single day of advice to get your novel finished!  (For general writing advice and to find out how I sold my first book, check out my Writers Q&A page.)

Words in dialogue and elsewhere that require emphasis:

“I told you it was going to blow!”

I opened my eyes and sighed. Today was my birthday. The big one.

Angie sat down hard in the chair. What do I want? She didn’t know.

My mind raced as I tried to remember what Jim had said about the night Sandy was killed. Sandy told me she was headed to the bar.

Note:  If you’re writing a manuscript for submission to an editor, it’s proper form to underline the text versus italicizing; underlining is easier for the line editor and copyeditor to see, and to correct if they disagree.

Check back tomorrow for the next tip from
YOUR PERSONAL FICTION-WRITING COACH:
365 Days of Motivation & Tips to Write a Great Book!
Can't wait or need to catch up? Get your own copy! 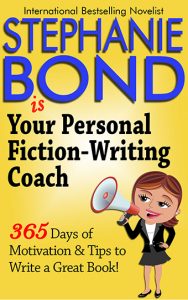